Find out more about our library services, facilities and resources

A useful history of the development of Open Access

Accessibility, sustainability, excellence: How to expand access to research publications / Report of the Working Group on Expanding Access to Published Research Findings

Commonly known as the Finch Report, this 2012 document has been influential in the take up of Open Access in the UK

This resource is licenced under a CC-BY-NC-SA 4.0 licence by the Office of Scholarly Communication, Cambridge University Libraries.

Open Access is the term which most people new to the area associate with research support. This is probably due to the fact that it is one of the most visible tasks carried out as part of supporting the research community and that there has been a great deal in the professional literature about its development.

Open Access is the process of making scholarly outputs freely available to access online. This research used to be available only by purchasing a copy or joining an academic institution like a library, both of which are barriers which not everyone can overcome. Open Access attempts to address this inequality of access by making outputs such as journal articles, data, conference presentations and book chapters available to a wider audience.

Although changing technology has made it easier to share work openly, many are concerned that the equality of access is not keeping up. People who are not part of the academic world are unable to access this information easily when it could be useful for their work or everyday practice, for example teachers who might need access to information on the latest approaches.

This includes the general public who might want to check facts and look at research results themselves – something especially important in the era of fake news! In the UK a portion of the money which goes to fund research comes from the public purse in the form of taxation. The government gives this to research councils who then decide which individual projects to fund. Given that taxpayers are funding at least a portion of UK research, should they not be able to access its outputs? Finally, some people have argued that publishers are making large amounts of money from disseminating this work and that there must be a better system. Open Access is one possible answer to these problems.

Open Access has a long and at times complicated history. Although the term Open Access was coined in the early 2000s the concept has been around for some time. The development of the internet meant that the technology for sharing research outputs with a wider audience was available and many researchers were quick to take advantage of this. The arXiv website was one of the first to launch as a way for those in fields such as physics, mathematics and astrophysics to share their work with peers prior to publication. The term Open Access became popular after a series of summits held in Budapest (2002), Bethesda (2003) and Berlin (2003) which created the definition of Open Access as we know it today. The Wellcome Trust became the first major funder to mandate that research outputs produced from its grants be made available openly in 2005 and several others have followed since.

In the UK, Open Access really started to become an issue in academia after the publication in 2012 of the Report of the Working Group on Expanding Access to Published Research Findings led by Dame Janet Finch. The Finch Report recommended Open Access as the preferred option for sharing research outputs, a recommendation which was swiftly accepted by both the UK government and the main research funders. In 2014 the organisers of the REF mandated that submissions to future assessments must be made openly available in order to qualify the exercise.

You can see a brief timeline of the major events in the development of Open Access below. 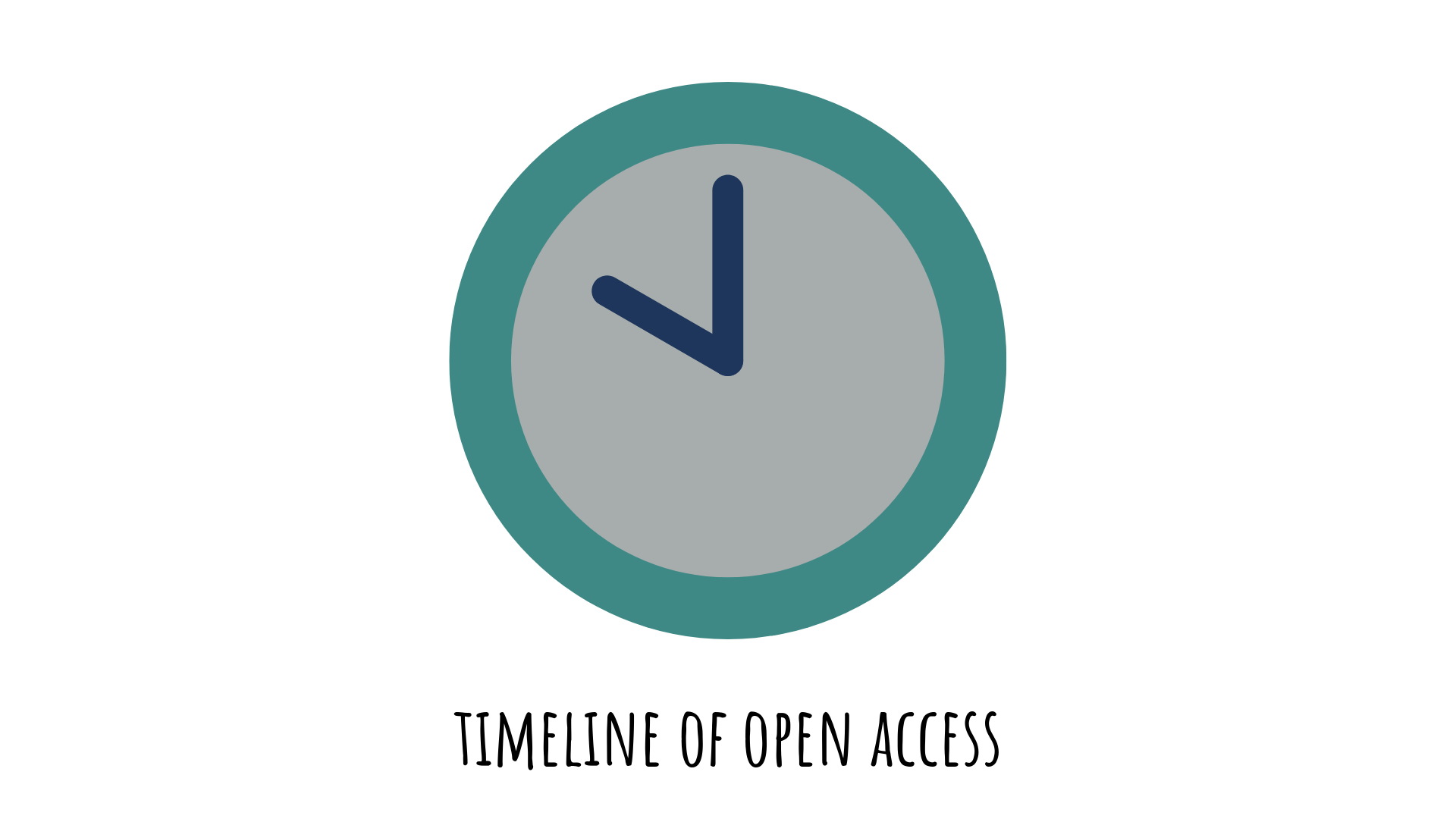 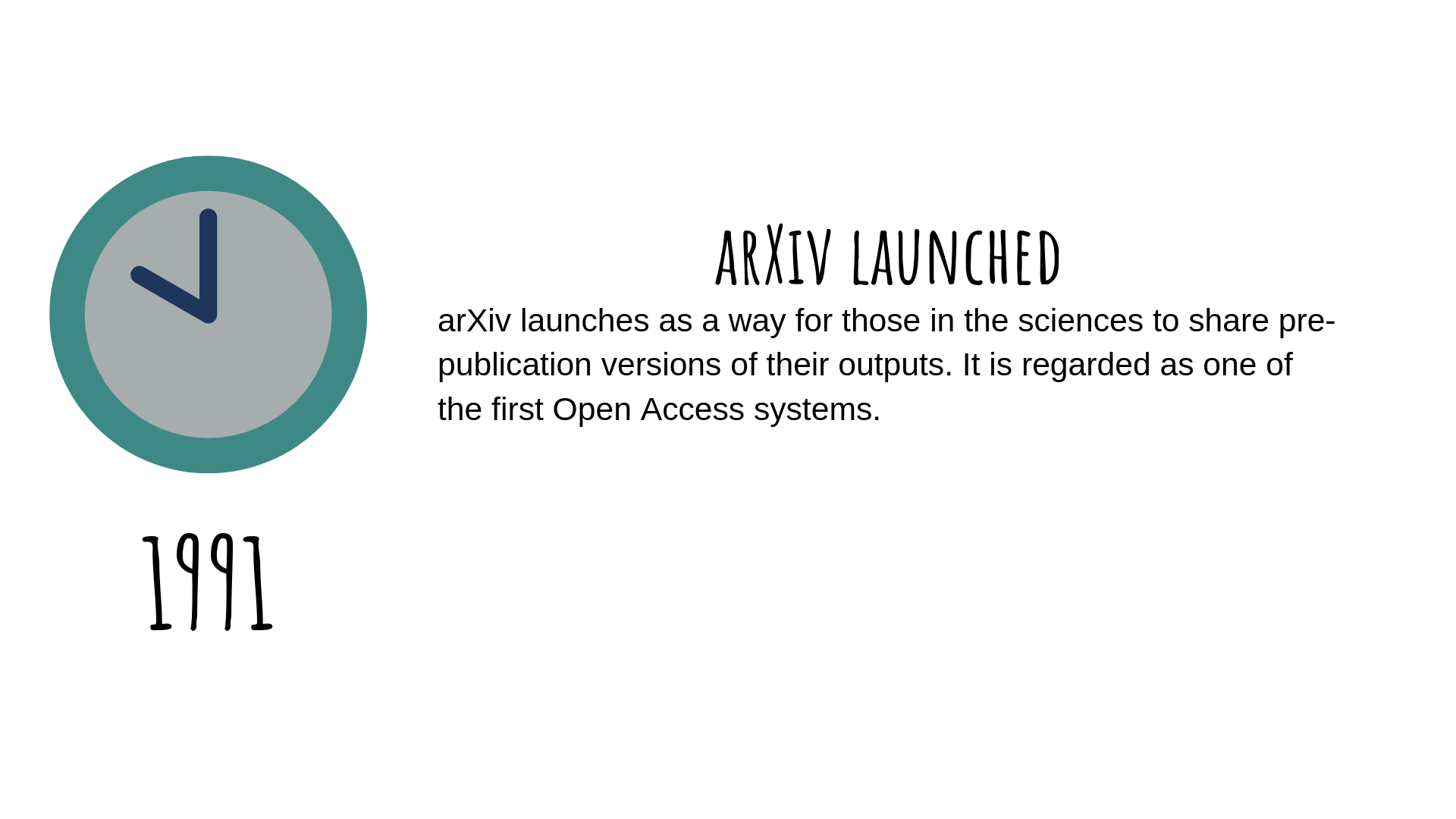 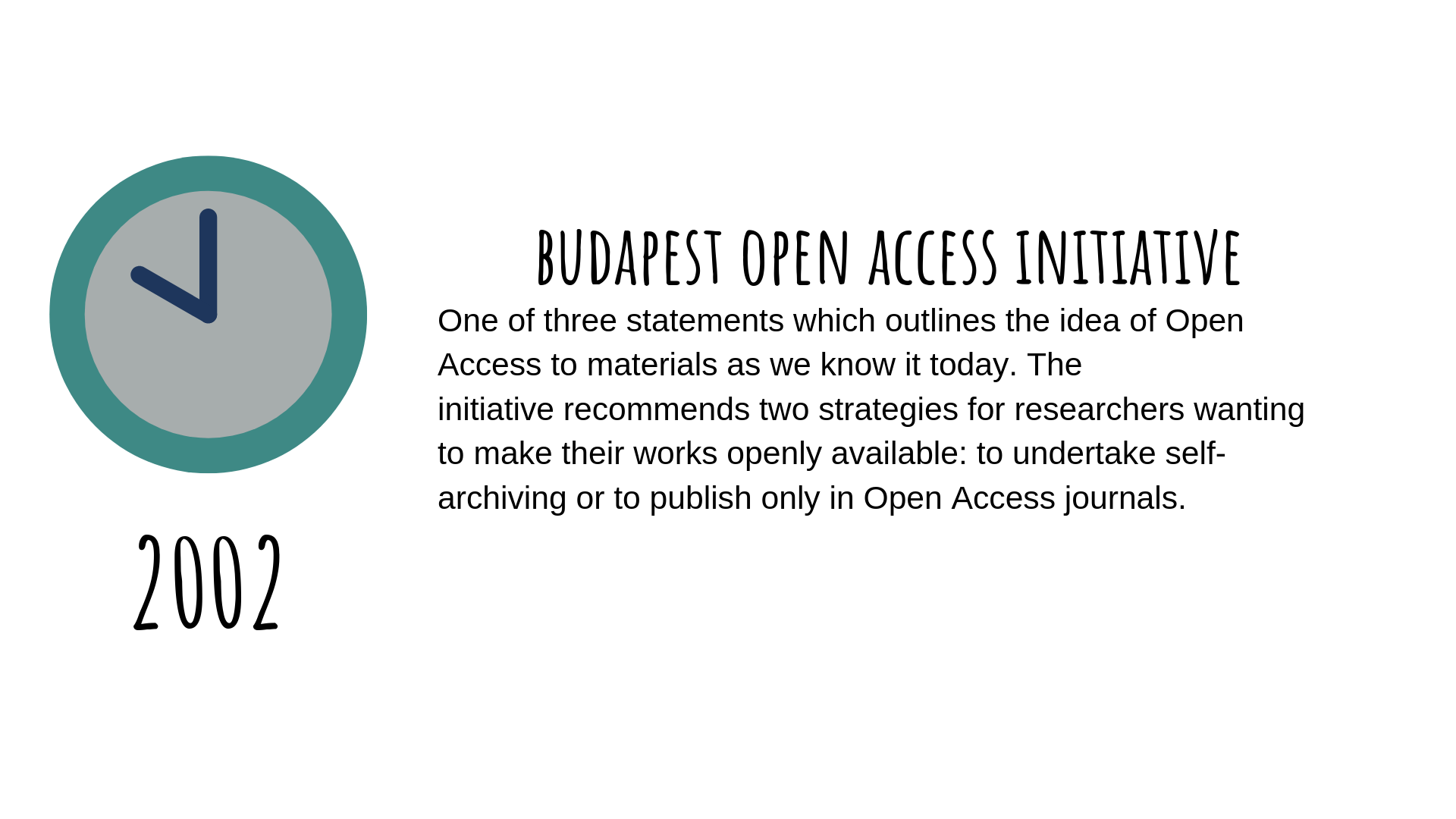 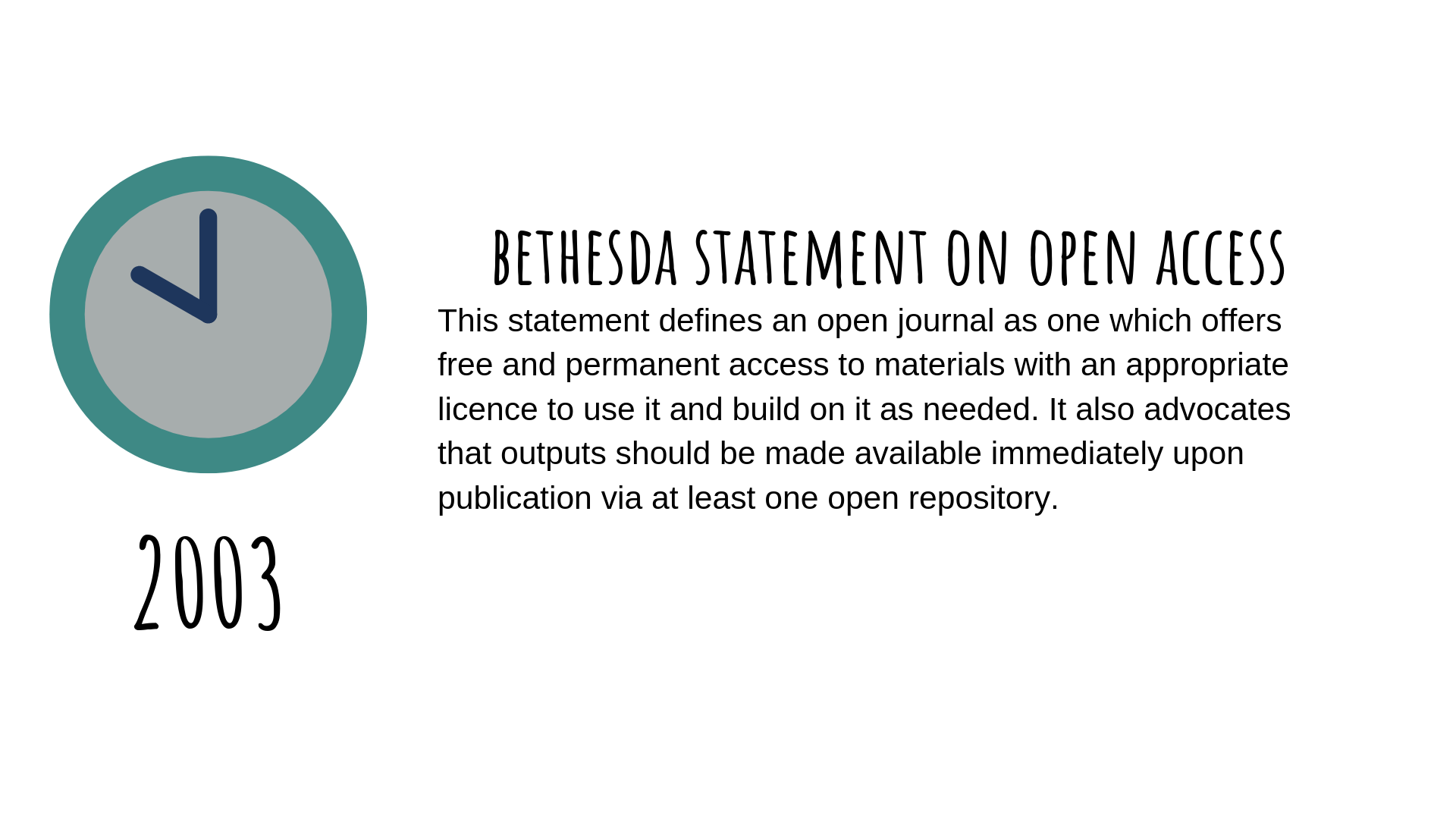 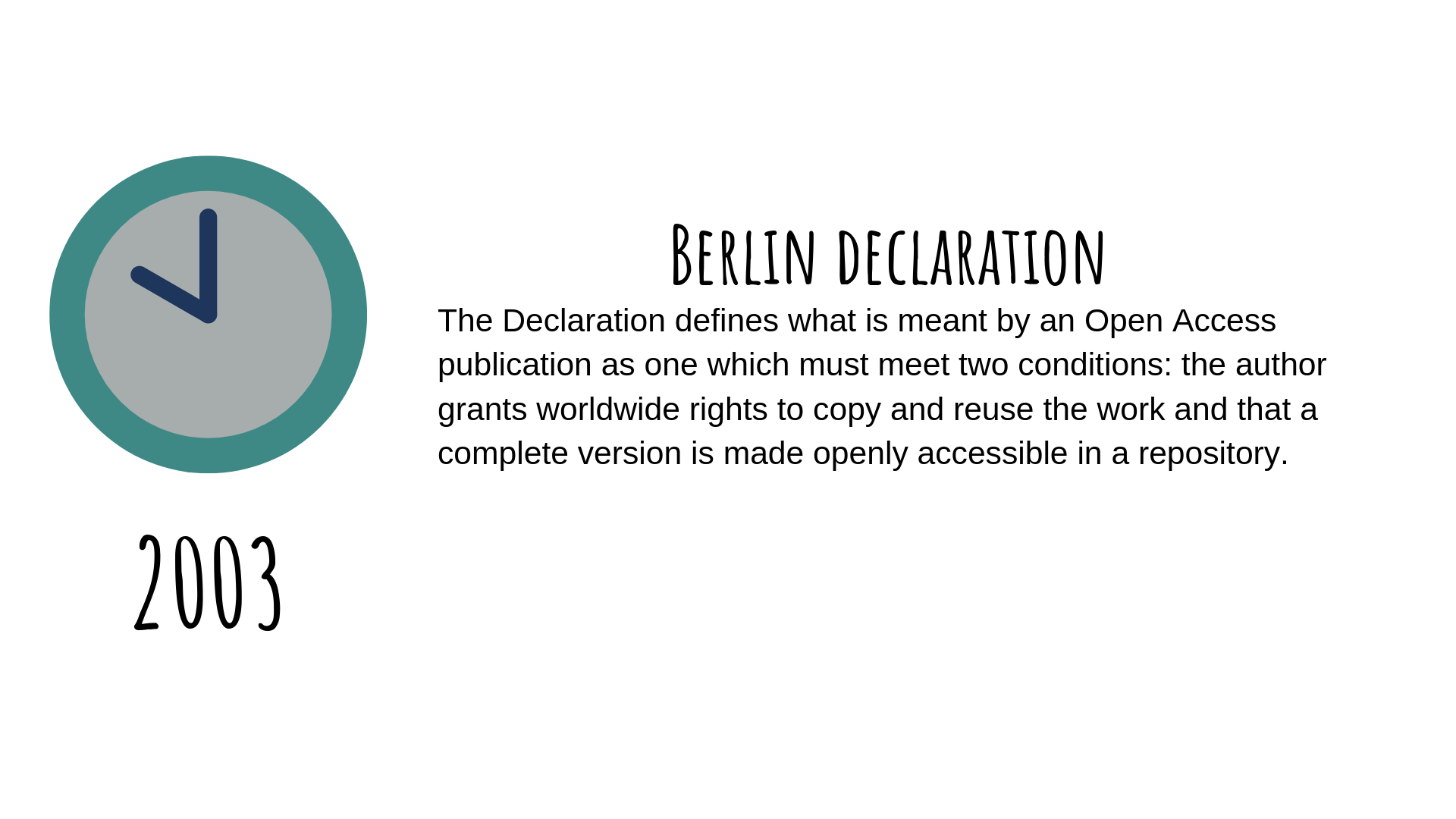 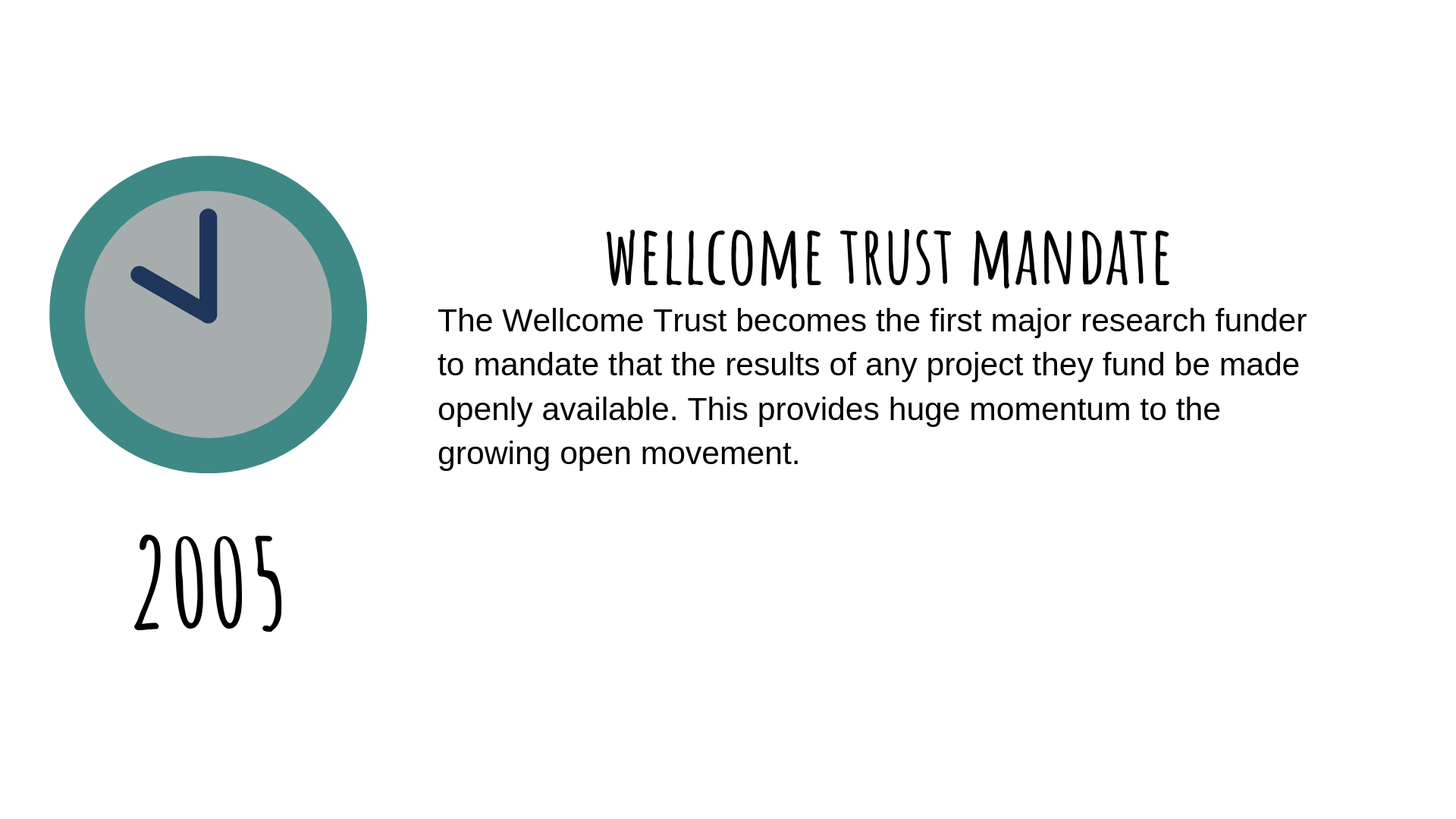 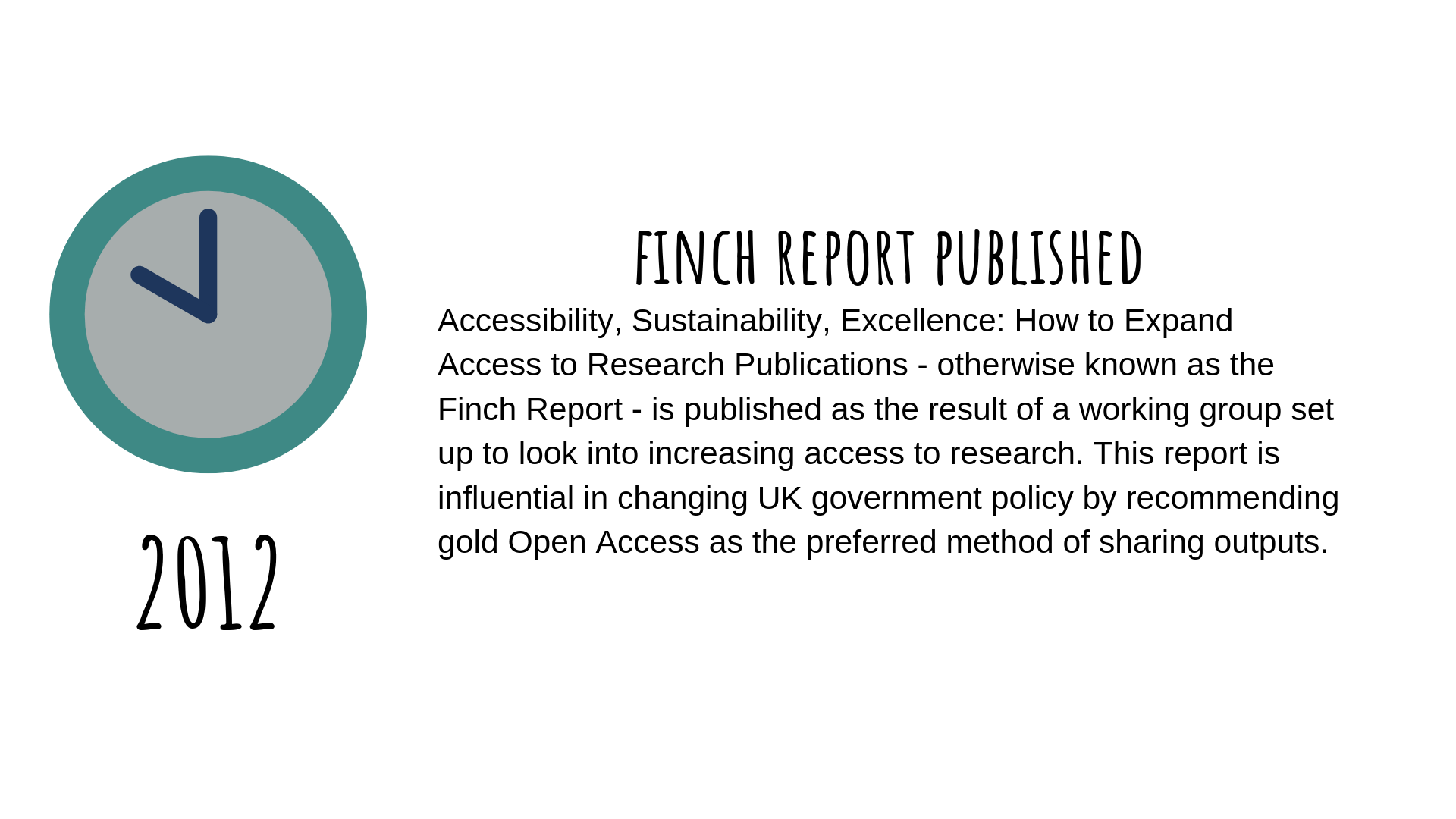 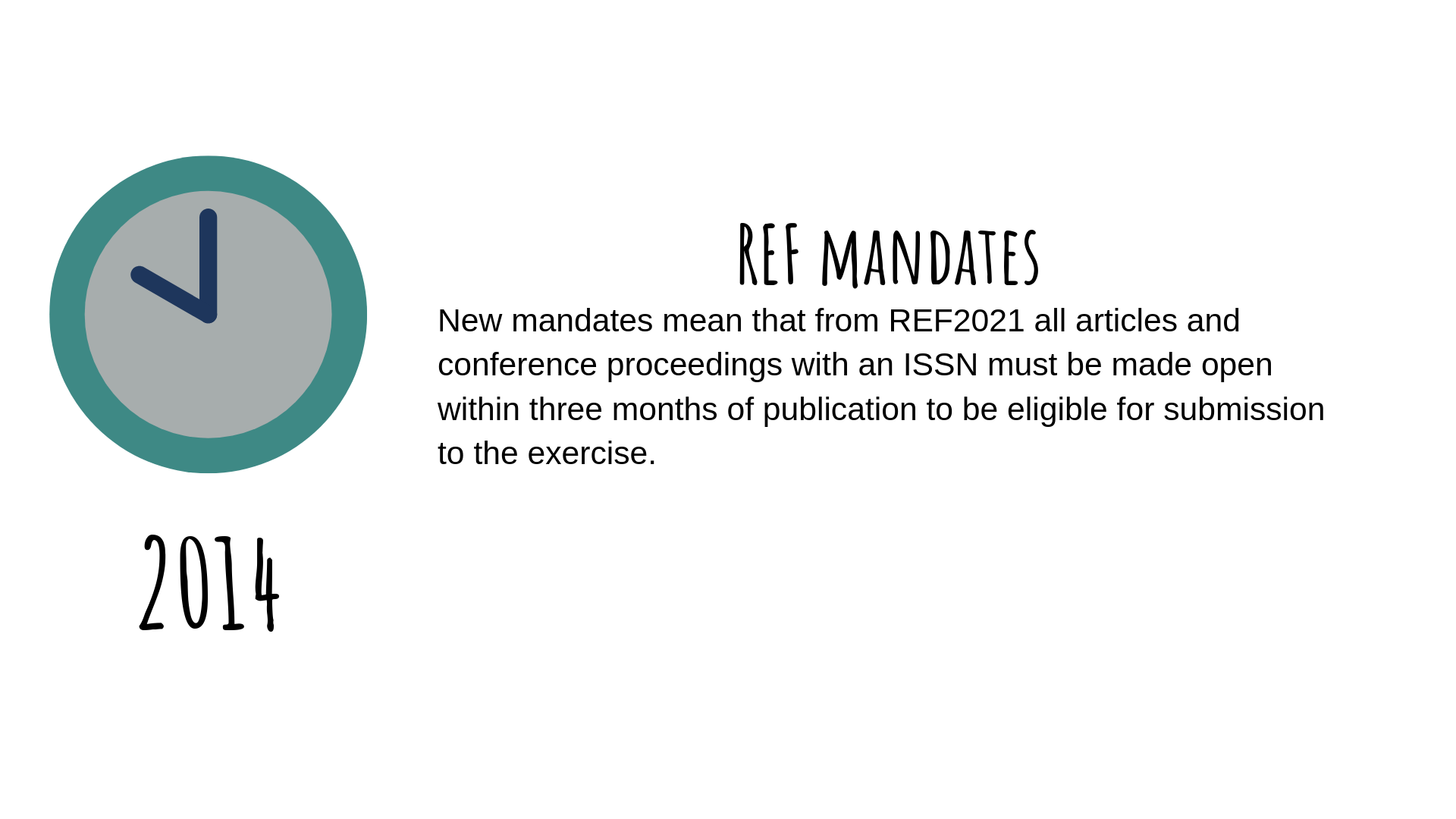 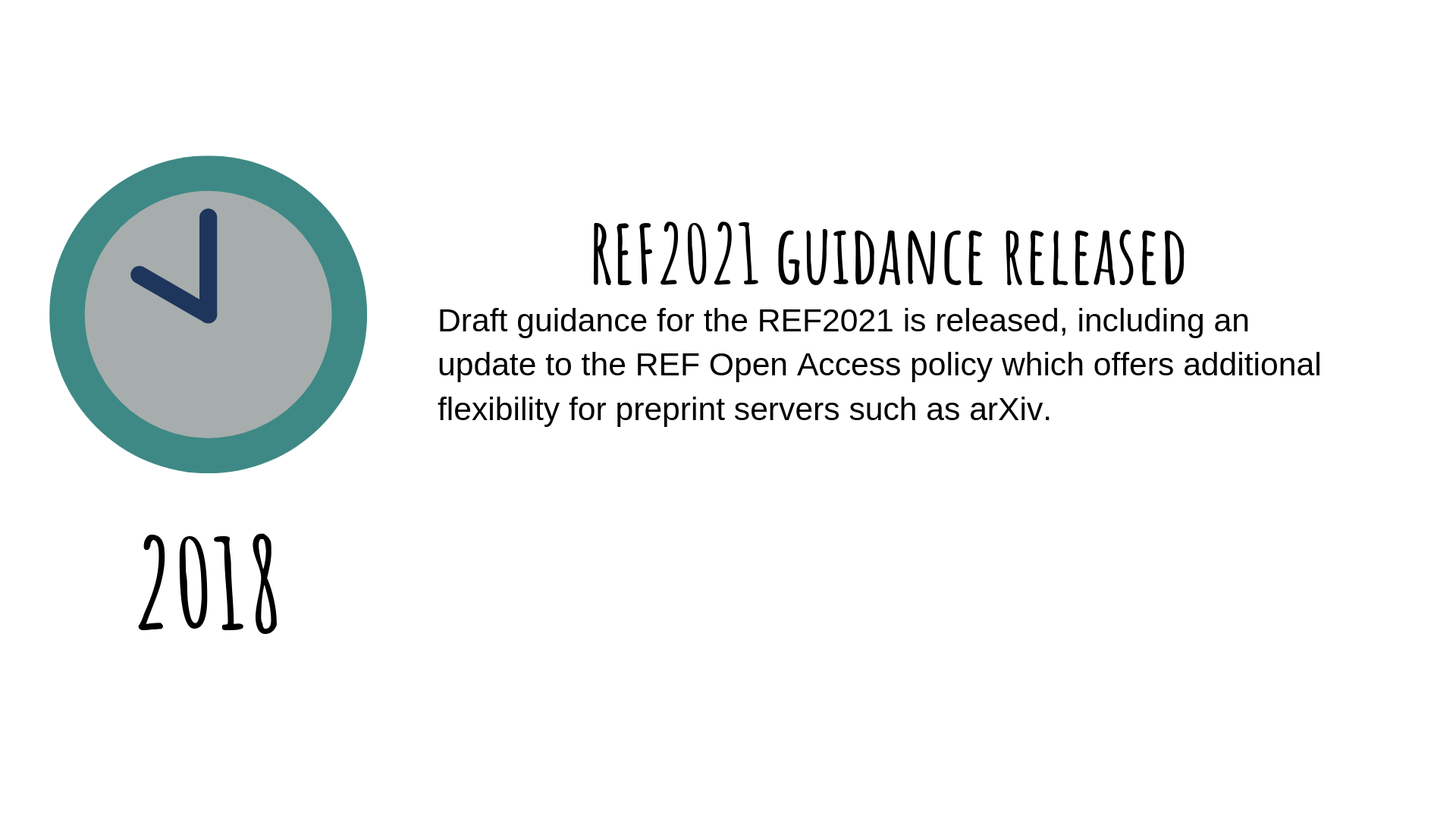 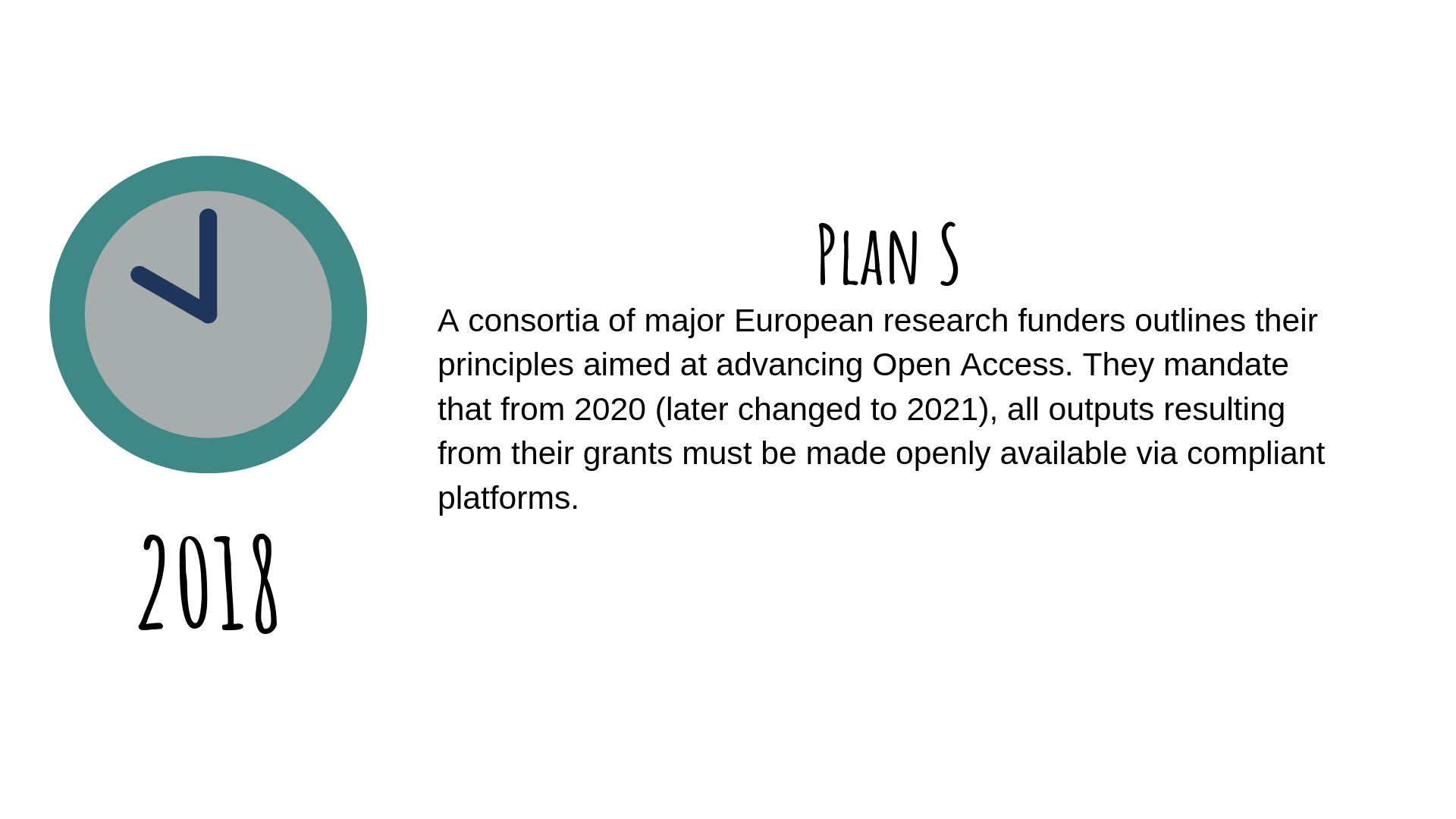 This is a very brief overview of how Open Access reached its current stage which does not really describe the complexities behind the scenes. When developing your knowledge about Open Access you may come across references to 'the Open Access movement'. It is important to realise that this is slightly misleading - Open Access is not one single way of moving towards a set goal but rather lots of different routes which try to achieve the same thing. Each faction has it's own goals and the argument can be fierce! However they approach it, most of these fragmented groups can agree on the main benefits of Open Access which will be outlined on the following page.